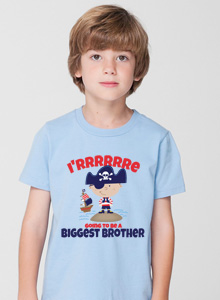 Sale Price: $17.90
He's the captain in charge of your little crew. Now that you're adding another sailor to the crew, let him make the announcement with our "Biggest Brother Pirate" t-shirt.
May We Also Suggest:

Surprise the relatives with shirts for the brother to be.