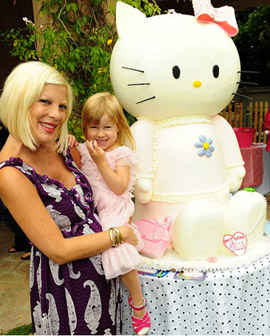 Wonder how the rich and famous celebrate their birthdays? One thing’s for certain: when it comes to Hollywood, the more extravagant the party, the more likely it is to land in newspapers and magazines all across the world!

Want to spend a few minutes in the birthday shoes of your favorite celebrities? Well, wonder no more: here's the rundown of some of the most outrageous celebrity birthday parties the world has ever seen!

If you didn’t hear about Naomi Campbell’s infamous 2006 birthday, then it’s time to turn a little green with envy.  Stretched out over three days in the world-famous and ultra-luxe Burj Al Arab hotel in Dubai, Naomi Campbell’s birthday (or weekend!) cost approximately $1.8 million to throw.  Guests were required to dress for the three theme days, including “Brazilian Samba”, “All White” and “Hip Hop”.  These costumes went a lot further than throwing on some inexpensive girls birthday shirts. Super famous guests included David and Victoria Beckham.

Comparatively, some celebrity birthday parties might seem a little low-key.  However, the amount of money that Lindsay Lohan has already dropped on her 23rd birthday this year is more than most people make with their yearly salary!  Now holed up in a luxurious suite in Las Vegas, Lindsay Lohan started off her birthday weekend with no less than five costume changes (one of which paid tribute to the recently deceased Michael Jackson).  Rumors have been swelling that she has already dropped $100K on her birthday.  With the dry spell of work she's been experiencing, who's picking up the tab?

It's no surprise that the Queen of Talk would appear on the list, especially as she's one of the wealthiest people on the planet.  For her 50th birthday in 2004, it seemed as though all of Hollywood lined up at her door to give her birthday wishes.  From Jennifer Aniston to Tom Hanks and everyone in between, Oprah made sure that all of her guests were attended to, with violinists and over 200 waiters working during the three-day celebration at various locations, including the Bel Air Hotel, her Montecito home and the San Ysidro Ranch.

Think that having one birthday party is overrated?  Then you think just like Paris Hilton, who had not one, but four birthday parties in March 2009!  From London to Las Vegas, it seemed as though no city was left out from her many birthday parties – and you can bet that by partying it up at some of the hottest spots in the world, her birthday month cost a pretty penny!

Of course, no celebrity has yet to beat the extravagant birthday party of the Sultan of Brunei in 1996, which cost about $27.2 million to throw. Not only did the Sultan treat his guests to the finest champagne and caviar in the world, but he featured a private yet very expensive ($16 million) Michael Jackson concert. With this as the most outrageous birthday party to date, it's no wonder that it hasn't been topped in almost fifteen years!

Check out a sampling of custom cheerleader T-shirts to set your team apart from your competition.

Save Everyday! Become a Member